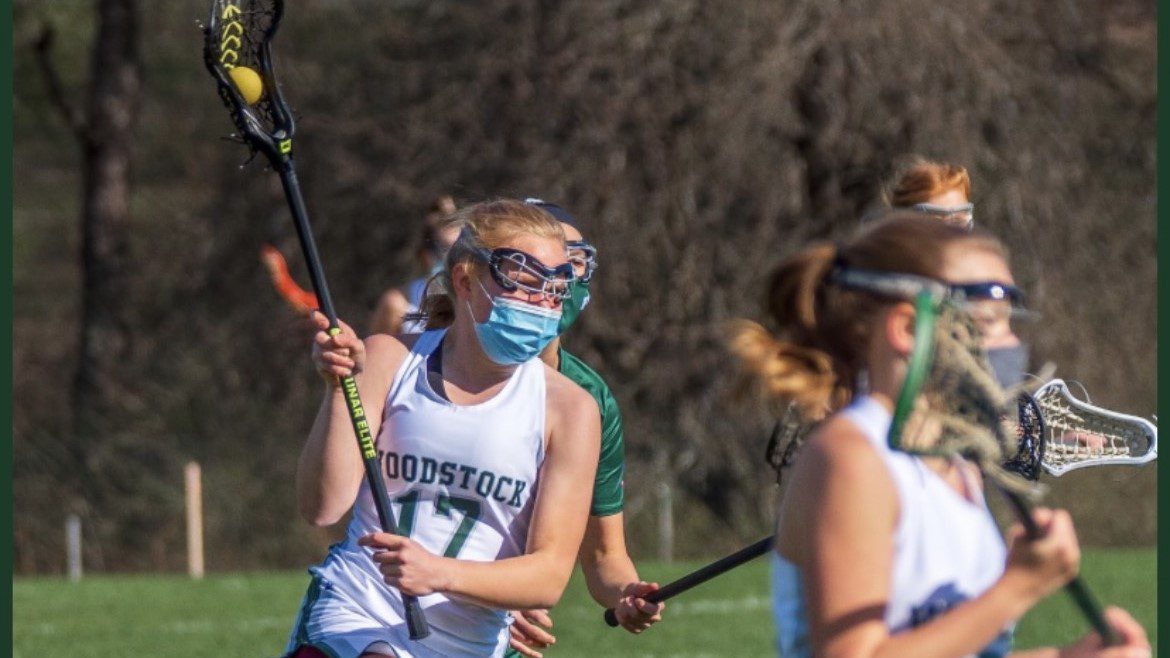 Those are the words of Woodstock Union High School’s (WUHS) senior star three-sport athlete Isabel Konijnenberg who chronicled her life in sports thus far and underscored that what some may consider games are foundational in the lives of young people around the world.

Konijnenberg, who now is a standout contributor to WUHS’ soccer, lacrosse, and hockey teams, got her start in sports when she was young. A Dutch native born in the Netherlands, who moved to Vietnam when she was two and eventually moved to the United States at age six, Konijnenberg got her first taste of sports in soccer, where she essentially grew up with a soccer ball by her foot.

“Soccer is something that was always kind of ingrained in me from when I was little. I come from a Dutch family, and speaking Dutch at home and having been born in the Netherlands – soccer is kind of like a massive piece of identity. I would say too almost every kid goes out and plays soccer,” said Konijnenberg.

“So that was kind of a given from the get-go — that I played soccer — and I just grew up and loved it.”

As she got a bit older, Konijnenberg found herself in uncharted waters. Her aggressive play in soccer caught the eye of a friend’s father, who then introduced Konijnenberg to hockey, and eventually, she made her way onto the ice.

“[My friend’s father] reached out to me — he saw me play soccer and that I wasn’t afraid to push anyone around — this is when I was like nine or so — and he was like, ‘Well, you got to come play hockey for me now,” said Konijnenberg.

Then when Konijnenberg got a little older, she was able to commit to another sport entirely — lacrosse.

“When I got to that middle school, high school age group, I finally actually had the time to commit to a high school or middle school age lacrosse team – that’s how I really got into it, and then from that, I absolutely loved it more than I thought I was going to initially,” said Konijnenberg.

While she made her way through the sports scene, when she reached high school, Konijnenberg found herself at a high school in Lexington, Mass. – but not for long. At the beginning of the hockey season in her sophomore year, Konijnenberg came to WUHS when her family moved to the more remote climes of Vermont to ride out the pandemic.

Since the move to Woodstock, Konijnenberg has seen her fair share of athletic success. She was a key contributor to the Wasps’ first-ever state championship in girls hockey last season. She also helped her soccer team make a finals appearance last spring.

Konijnenberg says that these are the achievements she is most proud of. She could have named her two scores en route to the girls hockey program’s first-ever title, but she did not — she was all about the team’s achievement.

While her dedication to sports has afforded Konijnenberg great achievements like winning a championship and making lifelong friends, sports have also helped her in other facets of life, such as academics.

Konijnenberg mentioned that athletics have helped her with time management, so she can not only juggle but excel in all three sports and keep up with schoolwork and social commitments.

Although being a three-sport student-athlete is a tough task, Konijnenberg says she draws on goals she set for herself and others for inspiration to keep going.

“Internally, I am motivated just because I feel like I have set these certain goals and expectations for myself, and those motivate me to show up every day just because what I want to accomplish is not going to happen on its own, whether that’s academically or athletically,” said Konijnenberg.

“But I think also that those goals have been instilled in me through being around people who are the epitome of commitment. Such as the coaches who show up to youth hockey on Saturday morning at eight o’clock every week and the players who have been playing and show up to 6 a.m.’s at 5:20 a.m. just to get on the ice early.”

This inspiration will undoubtedly fuel her in her future endeavors, in which Konijnenberg will attend Williams College and go on the pre-med track while she continues to play soccer.

As the final stretch of her senior year begins, Konijnenberg says she is grateful she ended up at WUHS. “I am so glad I ended up at Woodstock; I think that everything from the athletics to the academics to just all the various relationships I have been able to make while being at Woodstock have been truly invaluable to the person that I have become since moving here,” said Konijnenberg

While her impending graduation from WUHS certainly comes with mixed emotions, Konijnenberg is definitely looking forward to her next steps in life at college.