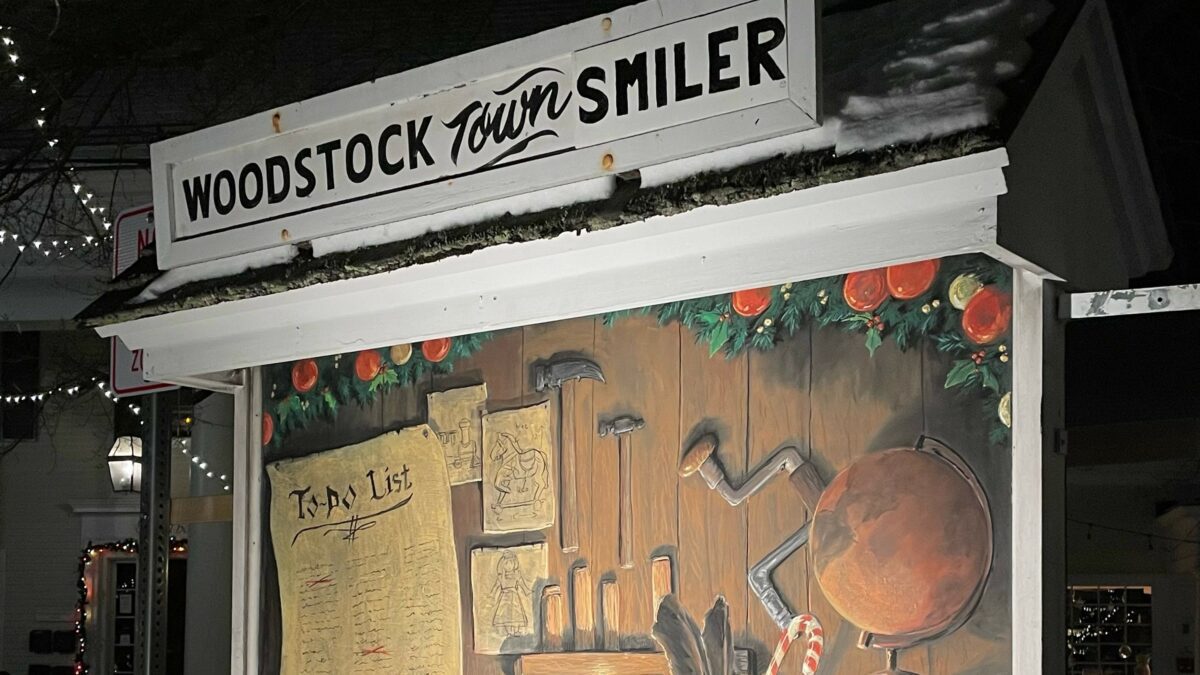 The inspired chalkboard musings of the “Woodstock Smiler” are to the visual arts what Brigadoon is to Broadway musicals.

The beloved Lerner-and-Loewe musical features two American tourists who stumble upon a Scottish village that mysteriously appears for only one day every 100 years. One of the enchanted tourists, Tommy, falls in love with Fiona, a young woman from Brigadoon. Much like the mystifying Scottish hamlet of the musical, artist Adrian Tans’ artistic meditations on the chalkboard at the foot of Elm Street in Woodstock Village appear magically, marking the changes of the season and promoting coming events, only to fall to the whims of an eraser in a few weeks’ time.

The chalkboard at the corner of Elm and Central Streets, long known as the “Woodstock Crier,” is owned and operated by the Woodstock History Center, located half a block up Elm Street. The “Crier” was maintained for many years by beloved community member Frank Teagle and used to inform the local community about events and happenings in town. Staff and volunteers at the Woodstock History Center kept it populated with news for many years after Teagle’s passing in 1997.

Then along came the COVID pandemic.

As with everywhere else, the pandemic in its earliest stages turned Woodstock Village into a near-ghost-town, devoid of special events and downtown visitors, townspeople hunkered down at home, quarantining and avoiding human contact. That’s when the extraordinary visual artist Adrian Tans, pastel chalks in hand, came up with a plan to lift the collective spirits of the community. He approached Woodstock History Center Executive Director Matt Powers with a colorful, whimsical idea and the “Town Smiler” was born.

“COVID came along and everything shut down,” Tans, the former curator at the Artistree Community Gallery in Pomfret and current youth services director at the Norman Williams Public Library, said in a wide-ranging phone conversation last Friday. “I think I was ready, through all of that, to want to do something. You couldn’t even go for a walk without having to think twice about it, although that was one of the things that people could do. It was such a strange contrast to the Woodstock of before, where everybody was always bumping into one another on the street.

“And then for some reason, I thought about that chalkboard, the ‘Woodstock Crier’ and I thought, ‘There are too many tears these days, so let’s change its name to the ‘Smiler’ and populate it with thoughts and images of the season,’” Tans added. “People really responded to it, and by the tail-end of those very intense days of the pandemic, people were telling me how they changed their walk routes just so they could walk past the ‘Smiler.’ It gives us all something to connect with each other about, to talk about.”

Simultaneously smart and playful, sentimental and celebratory, Tans’ chalk art at its very best spotlights Village festivities and the changing of the seasons, mutating regularly to trumpet the tenor of the times. In November, the ‘Smiler’ featured a Thanksgiving table spread, all the proffered goodies of the day covered in aluminum foil, playfully represented in pastel chalk, crinkles and all. Perceptive viewers chuckled when they noted the elephant-and-donkey salt-and-pepper shakers on the table, a gentle homage to the political and religious debates that often crop up at the traditional family gathering. Tans’ most recent ‘Smiler,’ set to remain in place until early January, initially featured a scrolled banner promoting Woodstock’s annual Wassail Weekend, held Dec. 9-11. When Wassail was all consumed, the banner was replaced with a craftily joking ‘To-Do List,’ reminding viewers of hyperactive holiday revelers everywhere.

Tans grew up in Newbury, on the North Shore of Massachusetts, and had a strong connection to Vermont through a high-school girlfriend who lived in Burlington. After several years of vagabonding, primarily to the West Coast, Tans settled in Cambridge, Mass., for nearly a decade. That’s where his art blossomed and where he met his late wife, Lina, and started a family. “I started painting a lot more and getting into galleries. I was part of the Copley Society of Art on Newbury Street, one of the oldest art societies in the country. And then I was illustrating children’s books and ramping up my momentum in the arts. I didn’t go to art school, I never got any formal art training, things just worked out for me I guess.”

Meeting Lina is most certainly one thing that worked out very well for Tans. It was a serendipitous occasion, much like the mythical blossoming of Brigadoon once every century or the appearance of a new ‘Smiler’ on the Elm Street corner every few weeks. “I met her while walking along the sidewalk in Harvard Square,” Tans recollected warmly. “And just before I met her, I thought to myself, ‘I’m about to meet the woman I am going to marry.’ Seriously!”

In 2008, the couple and their three children moved to Woodstock. “It just seemed like a good time to get out of the city, and we were able to carve out a wonderful little home for ourselves on Maple Street. We rented a house on River Street while we renovated the Maple Street house. We moved into there in August and then in December, my wife was diagnosed with stage-four colon cancer. That was a real life-changer, obviously. I was in the middle of working on a couple of children’s books, illustrating them, and managed to finish those and tried to stay active in the arts, but when you’re around illness like that, and you’re a caretaker and have a couple of kids, it’s your entire focus.”

Lina Tans defied all the odds, went through “a lot of surgeries and chemo, good years and bad years” and lived “a good nine years” until she passed away in 2017, Adrian Tans recalled. “The kids were kind of getting to an age where they weren’t so little, they were teenagers now and their focus was changing, and as a father, you found yourself thinking about teenager things,” he quipped. “And then COVID came along. I had run the Artistree gallery for almost 10 years and I was getting to the point where it was time for a change. When COVID started, there was just this broad sense of being unable to have any agency over things. That’s what got me started on the idea for the ‘Smiler.’ I was driving through town with my friend Caitlin Eastman and for some reason, I thought about the history center’s chalkboard and off we went,” Tans commented, serendipity and circumstance coinciding once again. “The ‘Smiler’ has become a point of connection for the town and for me, at a time when we’ve all particularly needed that connection.”

Creating connections is central to Adrian Tans’ being. Last year, at the height of the pandemic and just as public facilities were starting to come out of lockdown, Tans left his curator’s post at Artistree to join the staff of the Norman Williams Public Library in Woodstock as the youth services director. “It was great to be able to be part of that rebirth and have the library get off to a fresh start,” Tans offered. Noting his own light-hearted, childlike slant on life, Tans said it dovetails well with his love of working with kids. “I appreciate the absurd and taking a little bit of a different view on things, and that definitely crosses over into whimsy,” he added. “Kids do that, too. They look at the world with fresh eyes. They’re always asking me the weirdest questions and I try to give them just as interesting an answer,” Tans said, laughing heartily. “We try to provide activities at the library that stimulate that kind of curiosity and a fresh perspective on things.”

The ephemeral nature of much of Tans’ art — save, of course, for his paintings and book illustrations — is palpable, Consider, for example, the fleeting chalkboard artistry of the “Woodstock Smiler” and the award-winning, soon-to-morph-and-melt sculptures that he creates with a team of fellow Vermonters and friends each January at the annual International Snow Sculpture Championships in Breckenridge, Colo. Musing about the impermanence of much of his recent art, Tans waxed both humorous and philosophical.

“People ask me, ‘Isn’t it hard to erase the chalk?’ And I reply that it’s not — I’m used to it,” the maestro of passing pastels said. “And it’s nice, because then you don’t have to worry about storing it. Ask any artist what they really don’t like about making art and they say, ‘Dealing with it after it’s done!’ You’ve got to put it someplace,” Tans joked.

The artist has even started turning the erasure of his ‘Smiler’ works into a form of performance art. Rather than simply erase one work in preparation for crafting the next — “It’s more work to erase one of those than it may seem,” he pointed out — Tans has taken to inviting people to participate hands-on in the erasure process. Recently, he took that a notch further, asking two local bartenders to pelt one of his short-lived works with water balloons to help thoroughly wash away the chalk artwork. He videotaped the chalkboard bombing as well.

“I really appreciate that aspect of it,” Tans concluded, reflecting on the observation that his work, like the mythic village of Brigadoon, pops up for a short period of time, catches the public fancy, and then it’s gone. “I think it is really a healthy muscle to strengthen that ability to let go of things. Inevitably, that’s where we’re all headed.”