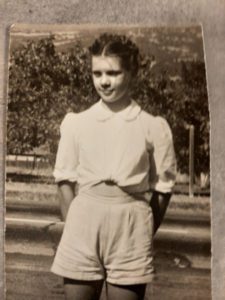 Carole Pye passed to her heavenly home from Washington Terrace Skilled Nursing Home in Ogden, Utah on July 24th in peace at the age of 86.

Carole McKenzie was born in Seattle, Washington on June 3rd, 1934. Her parents were Harry and Alice McKenzie. Her Norwegian mother graduated from Carleton College in Minnesota and was the daughter of Mayor Johnson of Howard, South Dakota. Her father was a Singer Sewing machine salesman and after serving in the Air Force during WWII, became a successful manager in the hotel and resort industry.

Carole’s parents managed a restaurant on Treasure Island during the San Francisco 1939 Worlds Fair Exposition, which celebrated the completion of the Golden Gate Bridge and the San Francisco Bay bridge. Carole remembered dancing in ethnic costumes on the outdoor entertainment stage as a five-year-old during the very crowded World Fair celebrations.

She grew up in the Marina district in San Francisco during WWII and  was a graduate of Lincoln High School.

She was married to Raymond Pye, a civil engineer for the state of California, and they had two children, Linda Susan and David Andrew. Carole worked as a secretary and administrative assistant in Sacramento, California for many non-profit agencies. She moved to Berkeley, California and later to Lake Oswego, Oregon. She was always active in the arts, volunteering for her church, and helping others as a volunteer for literacy councils in Portland, Oregon. She enjoyed traveling to Europe to visit family in London, Scotland and Denmark, where her daughter, Linda Simonsen and grandson Rowan Francis Simonsen lived. She also enjoyed visits to see her two granddaughters, McKenzie and Sarah Pye in Bear Valley, California.

Carole was an active knitter and an avid reader. She recently lived in Woodstock, Vermont where she enjoyed the historical New England village community, her church, and the cultural life centered around the Thompson Senior Center. Carole loved to participate in every activity offered, from daily exercise classes to the memoir writing groups, and especially loved the field trips to dinner theater and Lobster dinner in Maine.

Her son David brought her to Utah to enjoy the loving bonds of family life with his wife Shauna and her children Gabe and Bethany.

On her passing, the night sky lit up in fireworks for Pioneer Utah Days, and the Neowise comet burned across the horizon in its rare brilliance. She will be remembered and missed by her loved ones, and the staff and residents at Washington Terrace, for her bright spark and sweet smile, her sharp wit and her love of beauty,